In a relatively quick turn of events – so quick that you might not have noticed if you weren’t paying attention – BGO have exited the UK market. The troubles started a couple of years ago after a UKGC investigation uncovered various social responsibility failings which is essentially industry jargon for letting people lose more than they probably should or not doing enough to protect potential problem gamblers.

Things then went quiet and it was business as normal (aside from a £2m “payment” that for some reason wasn’t considered a fine) until 15th October 2021 when the UKGC suspended their license out of the blue. Smelling another large fine… sorry, payment, on the horizon they quickly decided to up stick and hand back their license.

The whole process from suspension to surrender took less than a week and they officially surrendered their license on the 22nd October 2021. 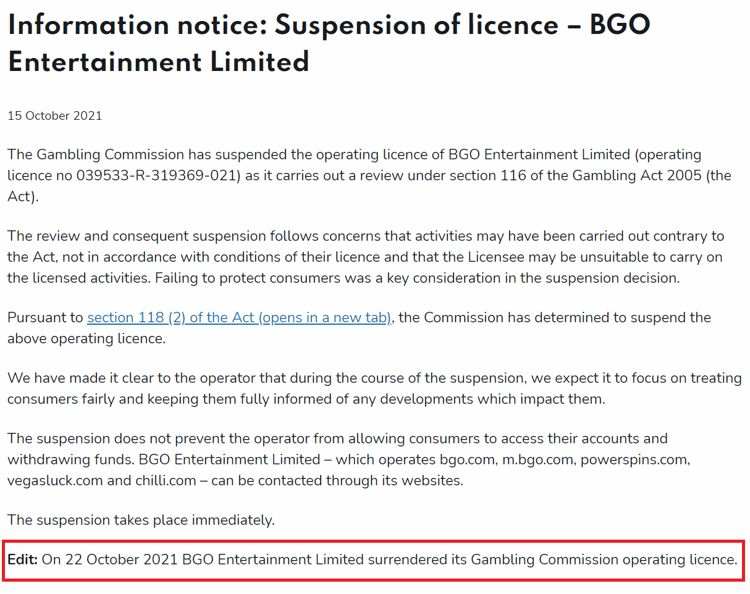 Who Are BGO & What Happens Next?

BGO Entertainment run the BGO brand which you probably saw heavily advertised on TV featuring Verne Troyer (Mini-Me from the Austin Powers films), as well as a couple of others – including Power Spins and 7 Casino.

Mainly operating as a casino they also offered bingo and sports products, but slots were clearly their main money earner.

To give them some credit, one thing that they did right was introduce wager free spins very early on. In fact, they were probably one of the first brands to drop wagering requirements from their free spins, at least on a regular basis.

As far as we’re aware they still operate sites outside of the UK market, but UK punters are SOL. With the only options left being to log in and withdraw any funds you might have in your account.

And if you have active bonuses? They’re probably done, even if you have wager-less free spins. It might be worth confirming this with customer service if it does affect you but without a UK license they’re not allowed to offer any form of gaming to UK players so unless they’re willing to convert to cash as a gesture of goodwill (which, let’s be honest is a bit unlikely) then consider any outstanding bonus or loyalty points a lost cause.